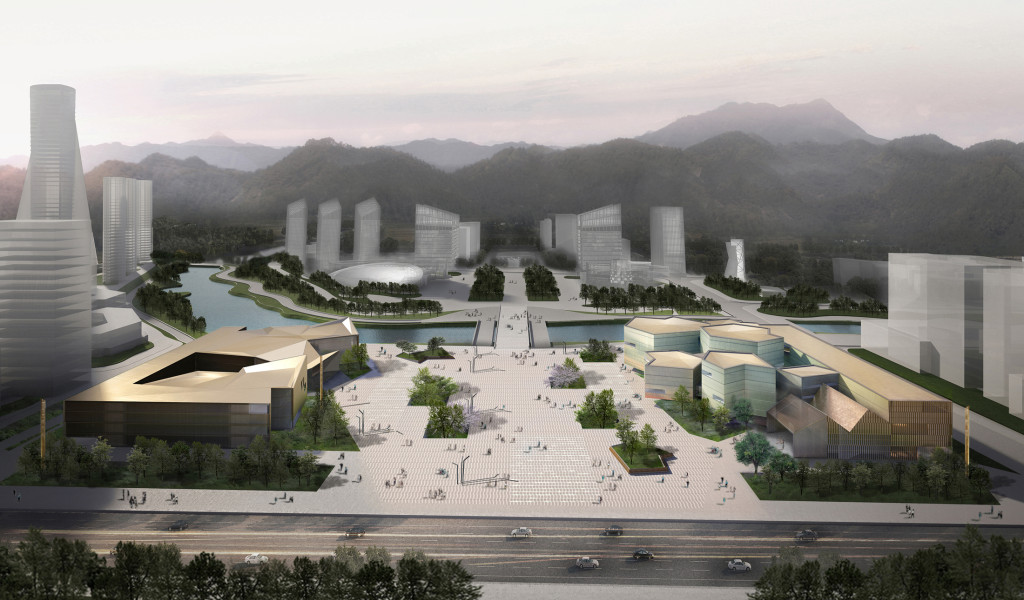 The urban and architectural operation proposed presents two unique buildings: on the one hand the Heritage Museum, on the other hand the Digital Television Center and Cultural Center. Together they represent the activity, progress, and history of Hunan—a place of pride that endeavors to synthesize the past, present, and future of the province of Hunan and the city of Jishou, a place to remind the people of where they come from and of what their place in the future can be.

This reality can be manifested in different ways, but for sure it’s the public space, the large square between the two buildings, that plays a dominant role. The central square is not just an open space. It has symbolic value. It is a meeting point that can take in a variety of civic events and exhibitions, but it also takes on a symbolic role in the sense of representing two times: the past identified with ethnic groups, and the future having to do with technology and industry. A place, hence, of synthesis. A void full of meanings and intensities that allows us to experience the evolution of a nation within a prosperous China, Hunan, that while respecting the history and hard work of ancestors, knows to join the train of the future. This symbolic nature of the square, combined with the fact that very representative buildings rise on two sides, makes the urban space take on a theatrical character of great value. It is a place that represents all of society.

Our proposal for the Heritage Museum is, above all, about the importance of representation. It seeks to be the translation of a proud way of looking at history, at time, and especially at the people who have through the ages built the essences of Hunan as it is today; a nation that takes pride in itself.

The layout is simple. A linear volume joins and protects the glazed blocks, which interact as if they were dancing over a park.