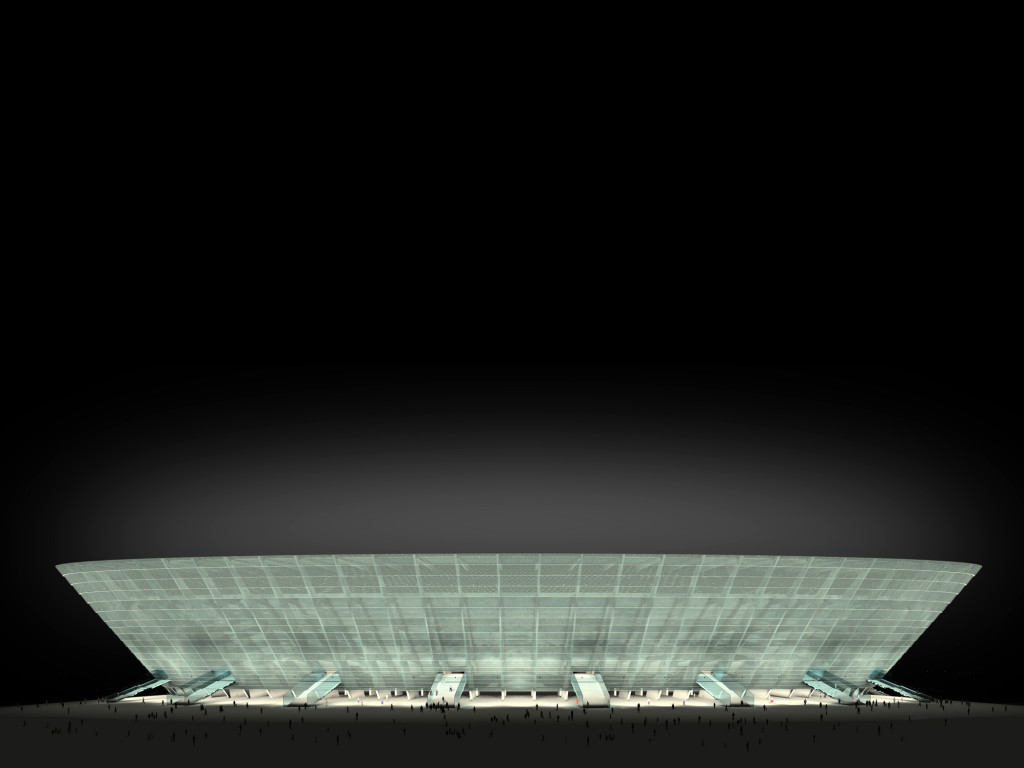 A soccer stadium belongs to that group of projects in which the piece, due to its size and magnitude, becomes the central part of the scheme to the detriment of more contextual considerations regarding the existing urban structures. In this particular case, the characteristics of the plot – far from the city, next to a beltway, and for the time being with no built references around it – support this option that weighs up the stadium-object against the stadium-city, hoping that this new piece, significant in both quantitative and qualitative terms, may act as a catalyst for the future urban developments in the area.

The clarity and boldness of the form chosen reinforce this iconic vocation. The reproduction on the exterior of the slopes generated by the stadium’s load-bearing structure resemble a “bowl” -identified with the most simple and intelligible way of conceiving a soccer stadium.

The piece is placed over a stone platform shaped with gentle slopes and punctuated by green spaces and landscaped areas with color. This platform configures the first excavated ring, attached to the terrain, which is directly accessed from the perimeter. It also contains the freestanding ramps that, resembling airport “fingers”, spring from it to reach the higher grandstands that trace the light “bowl” hovering above the base. The interior of the platform accommodates services, parking and retail areas linked to the activity of the Real Club de Fútbol of Zaragoza. The construction system is appropriate to the result desired: a radial series of prefab concrete ribs compose the “bowl”. For the exterior, the project suggests a skin formed by profusely perforated aluminum sheets whose lightness and malleability define the shape perfectly, and at the same time hint at the conceptual clarity of the interior structure.

Choosing this material for cladding has to do with the other aim of the project: to use natural and artificial light as a material that helps to define the project. The aluminum sheets reveal a rich play of transparencies and reflections. When the light from the interior is filtered through the perforations, or when that of the spotlights placed over the access perimeter is reflected on the surface, the piece shall take on formal values that, in the end, will be very attractive, making the complex special and giving the stadium a magical quality.