The industrial buildings like the old sugar refinery of León are striking constructions, often manipulated and altered with a total lack of consideration. This is probably so because the author of the transformation is often driven by the pursuit of maximum efficiency. But the result, perhaps by chance, is usually attractive, clear, oblivious to minor matters that sometimes overshadow the architecture itself. Instinctively, the mechanism by which pieces are added relinquishes ‘articulation’, which is considered a ‘waste of time’ and an ‘architectural weakness’ common to less bold and less ‘serious’ programs, and is in these cases addressed in an immediate, direct way with no regard for the existing.

The proposal respects the built space just as it is, archaeological and dismembered. It basically suggests cleaning the space, defining it and enhancing its value. The new buildings, linear and smooth, are inserted just as the industrial engineer in charge of the facilities would have done: with logic, showing that once built, it is as if they had always been there. Their situation has to do with the new role that the refinery plays in the city – though it once belonged to the industrial periphery, now it is an important piece within the new urban fabric of this area, which will soon welcome the new AVE train station.

Municipal Exhibition and Congress Center of Ávila
2001
/
2009
Ávila is a dense and intense city. Its layout, centered and delimited by the smoothly crafted city walls, confirms this perception. Actually, Ávila itself is a rock amid the harsh landscape surrounding it.Within such thickset contexts, any clear space takes on an added value much related to the concept of contrast or of boundary. In such cases a square serves as a means to free up interior space, and externally, to articulate the relationship with the city walls. The area outside the walls belies the origin of these voids that organize the space between the city inside, and the city outside. The presence of an open space at the foot of the walls, where the new Congress Center shall go up, allows thinking of new systems to structure the urban space.During the project design the guiding principles were conceptual density, generosity in the way of occupying space, and exploitation of the topographical features of the site. The landscape studded with granite pieces, both formally and spatially, provided the references needed.The Municipal Congress and Exhibition Center is aimed at becoming a meeting place to celebrate different kinds of events, a levelled area or plaza at the edge of the walls. The main level of this area is matched up with the highest point of the plot, so that its extension generates a large interior void that shall house, without excavation, the required uses.The building basically takes up the northern side of the new public space, delimiting along with the walls the new square. In keeping with the contours of the site, the project combines two different geometries: the most orthogonal and elongated space contains the auditoria and main halls, while the most precipitous and uneven one contains the exhibition spaces.Entry to the complex is clear and easy: the main auditoria are reached from the square and from the higher part of the seating area, which allows to get a quick grasp of the interior space; and the exhibition areas have an independent entrance from the incisions on the platform in the eastern boundary and, since all the different areas are connected under the square, they can also be reached from the interior of the building. From a formal and constructional point of view, the project draws inspiration from the evocative strength of the landscape, from the granitic mass that pervades everything.The volumes are meant to be seen from afar, high up from the walls like a sculpture carved out of the terrain. It is a juxtaposition of granite volumes, summed up in one piece, a more orthogonal one, cut and carved in a precise manner, and another more abrupt and topographical piece that covers the exhibition volume. For this reason the roofs shall be designed to smoothly extend the vertical surfaces. These folds generate the incisions through which natural light floods the interior, also allowing independent access to this area. 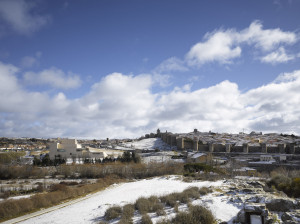 Baluarte. Auditorium and Congress Center of Navarre
1999
/
2003
This is the most important project, in both quantitative and qualititative terms, carried out in the recent history of Navarra. The project includes halls of different sizes (for 1,600 people / 600 people / and 4 for 300 people), as well as a 5,000 square meter exhibition area, catering areas covering a total public surface of 1,500 square meters and storage and office areas.The project, aware of the enormous importance of the site chosen (an area of transition in the very historic center of the city and bordering on the impressive Renaissance fortress), keeps in mind the status of the building as an element capable of transforming the city. In this sense the project acknowledges the need to give up an autonomous architectural scheme in favor of a complex with a clear concern for urban scale. 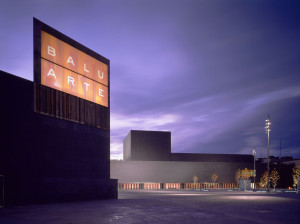 Congress Center and Hotel. Palma de Mallorca
2005
/
2017
The scheme for the new Congress Center and Hotel of Palma may be explained as two large stretches that unfold following the north and south boundaries of the plot fronting the sea. Two stretches of wall devoid of physical density but endowed with functional and architectural relevance. The one facing northwards contains all the facilities that complement the main program, as well as the supplies and staff access areas. But the most important one, the one facing south and towards the sea, shall be a deep facade, a facade-space formed by a dense vertical structure that evokes the density of the walls (of four meters in depth), shelters the interior from the direct entry of light and yet allows to accommodate staircases (in some cases escalators), which afford views of the sea horizon as they go up or down. These connecting elements reveal their presence towards the exterior in the form of large glazed screens set in the overall fabric.The depth of the façade on the lower floors allows to fit in the accesses, thereby highlighting the transition between interior and exterior and also accommodating retail areas that, located right next to the exhibition spaces, look onto what will become the new seafront boulevard.The linear distribution of the program enables the different areas of the building to perform and be used in a relatively independent way. The public accesses are located basically on the facade that extends Manuel Azaña Street, underscoring the relevance of the same, and in the seafront promenade in the case of the auditoria, and along this last one for the exhibition areas.On the one hand, the project design aims to make the most of the light of Palma generating a series reflections and defined shadows, and, on the other, it plays with the image of a large beached fish, of well-defined forms and geometries but with a subtle transition that manages to explain the continuous geometry of the roof itself, only interrupted by the suspended garden of the restaurant that rises as a large lookout with direct views onto the sea and the coastal promenade.

Auditorium and Congress Center in Palencia
2000
This project involves working on one of the most interesting of industrial typologies present in our built heritage: buildings that in the past were used as "tejeras." These generally contained furnaces and chimneys, Freed of the functions they originally served, these elements take on a new formal and spatial significance. The new building will include a number of exhibition areas, an auditorium for 800 people, and a range of ancillary spaces. The project also involves refurbishing the adjacent park and addressing the building’s interaction (accesses, etc.) with the city. 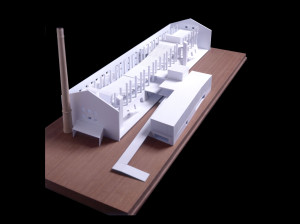 Spanish Pavilion Expo Zaragoza 2008
2006
/
2008
Evoking the space of a forest, or of a group of bamboos on a surface of water, has been the main aim of the project. On the one hand there is a desire to create a building mechanism able to generate incredible possibilities from the point of view of energy logic and environmental awareness, an essential and symbolic aspect for the future Spanish Pavilion at the International Exposition of Zaragoza. But on the other hand, one of the most attractive spaces one may have deal with, both in terms of matter and light, is transferred to the field of architecture. Changing spaces, spaces full of hints and nuances where concepts such as verticality and depth play an essential role.Is the artificial reproduction of a natural process possible? This is an old, unattainable aspiration of architecture. However, in this case this approximation is possible because the geometric strength of the metaphor performs in our favor, and the image suggested gives the proposal a symbolic charge that is necessary in the case of a pavilion, that of Spain to be more precise, for an international expo. The metaphorical allusion, in which water is present through the landscape of reference, is strong and evident.   Construction. Pieces. The process is clear and simple. The vertical elements may be manufactured in a workshop. They have a metallic core clad in pieces made of clay that, in contact with water, absorbs it generating air currents that act as microclimates (see corresponding project descriptions and schemes).Its bracing, to ensure structural unity, is very simple and based on the same method used in many nurseries to maintain trunks vertical.Roof. A huge roof, supported off by all these profiles, covers the pavilion. It is a useful roof because its width (three meters) allows to accommodate energy saving systems (see project description) and, at the same time, adjust light with the help depth, which makes the sunrays, very controlled, draw their trace and reflection on the columns and the water surface at the base. The roof is clad in panels of recycled wood shavings.Exhibition Spaces. They are carved out voids. Their slabs hang from the large roof, braced only to the columns. They are built with beams of recycled wood shavings and resin. The exterior enclosure is also of glass. A system of mobile partition walls will be anchored to the structure, with the visual and acoustic insulation needed for the development of certain exhibitions and for the future cinema center.