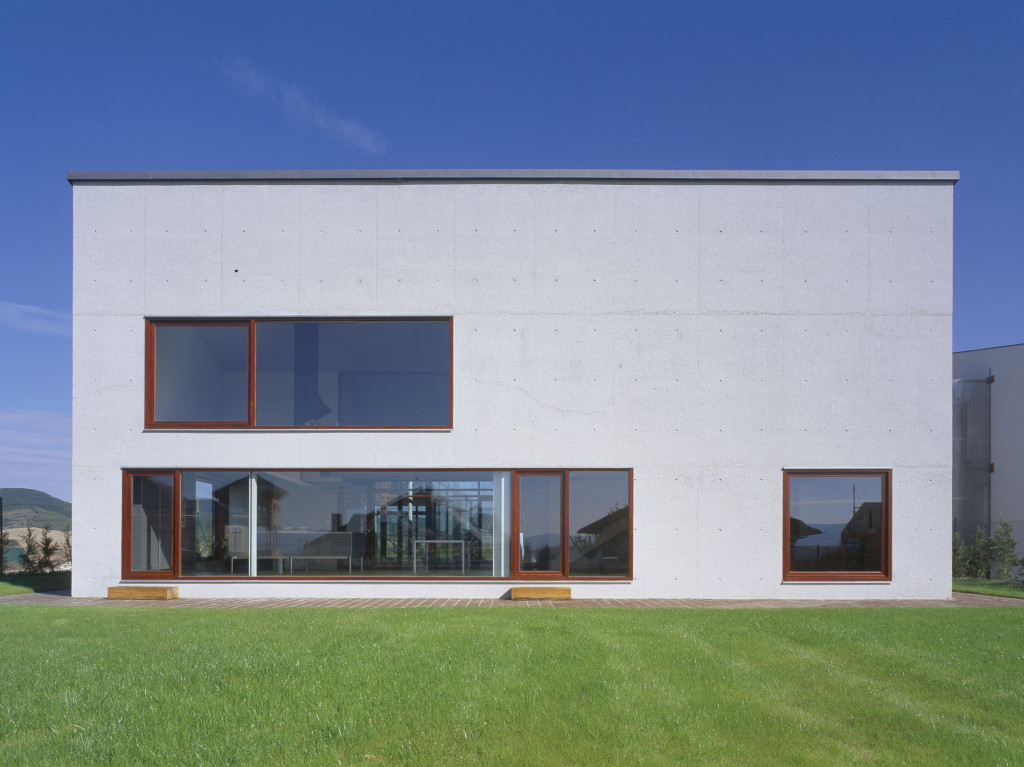 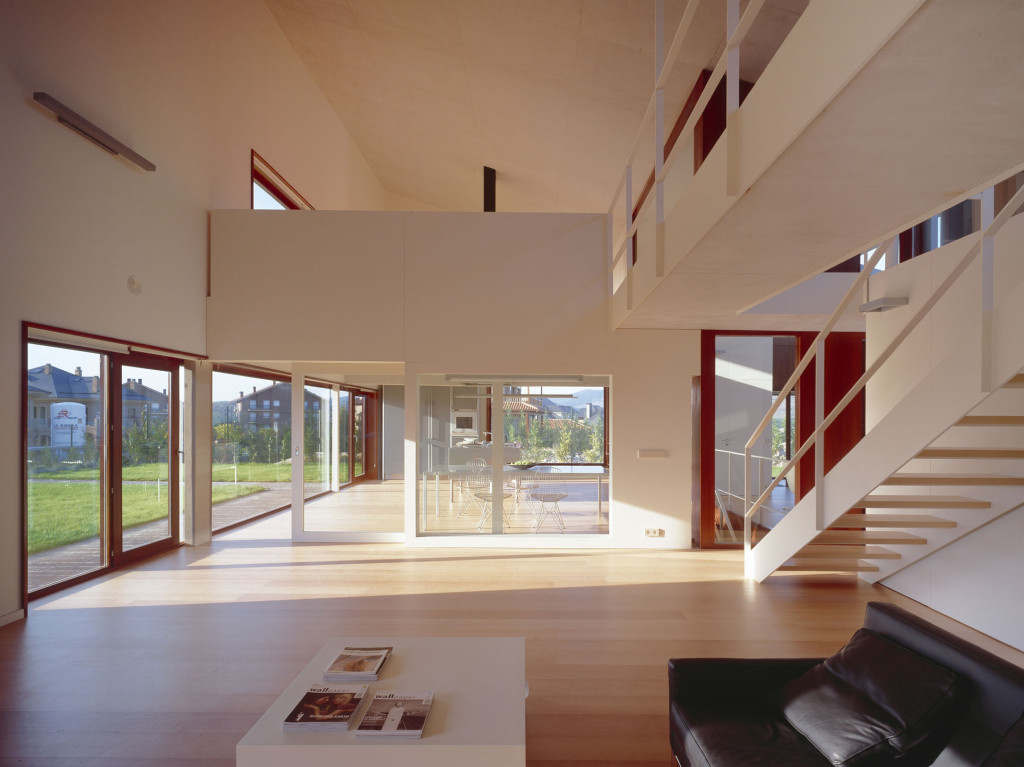 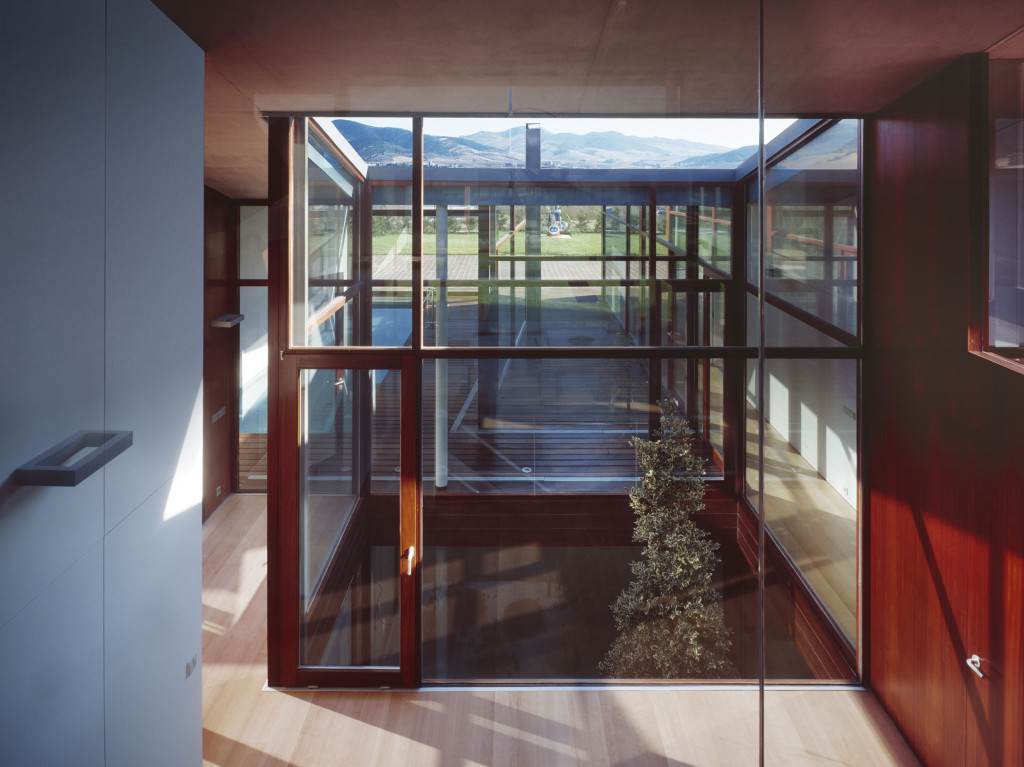 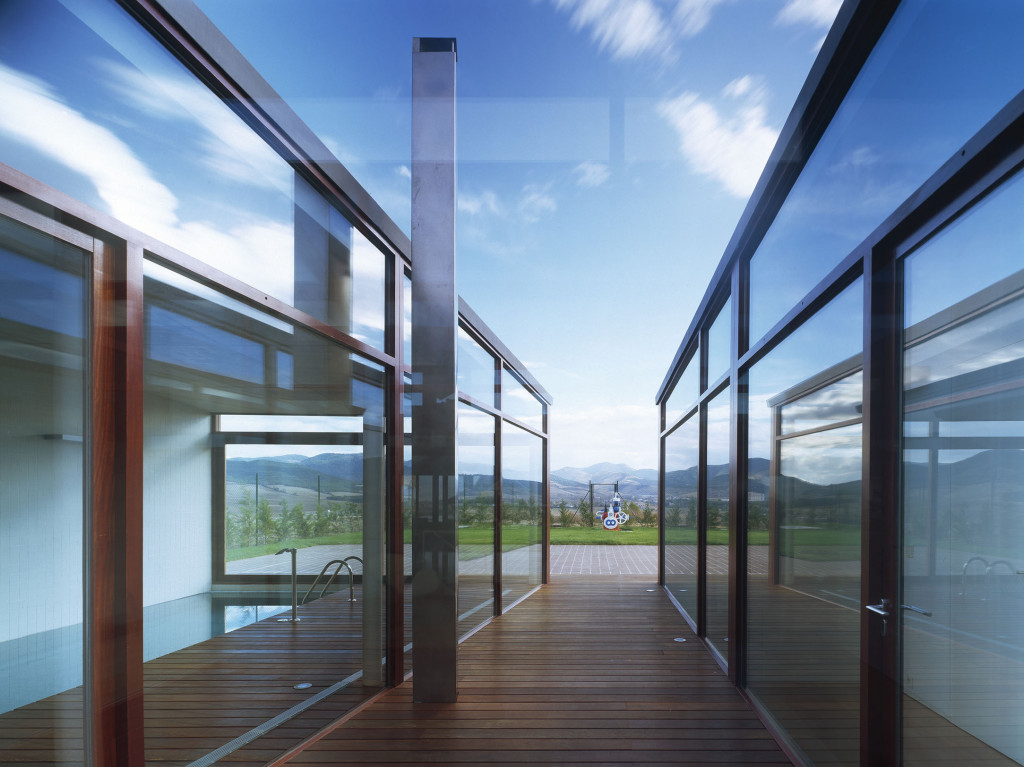 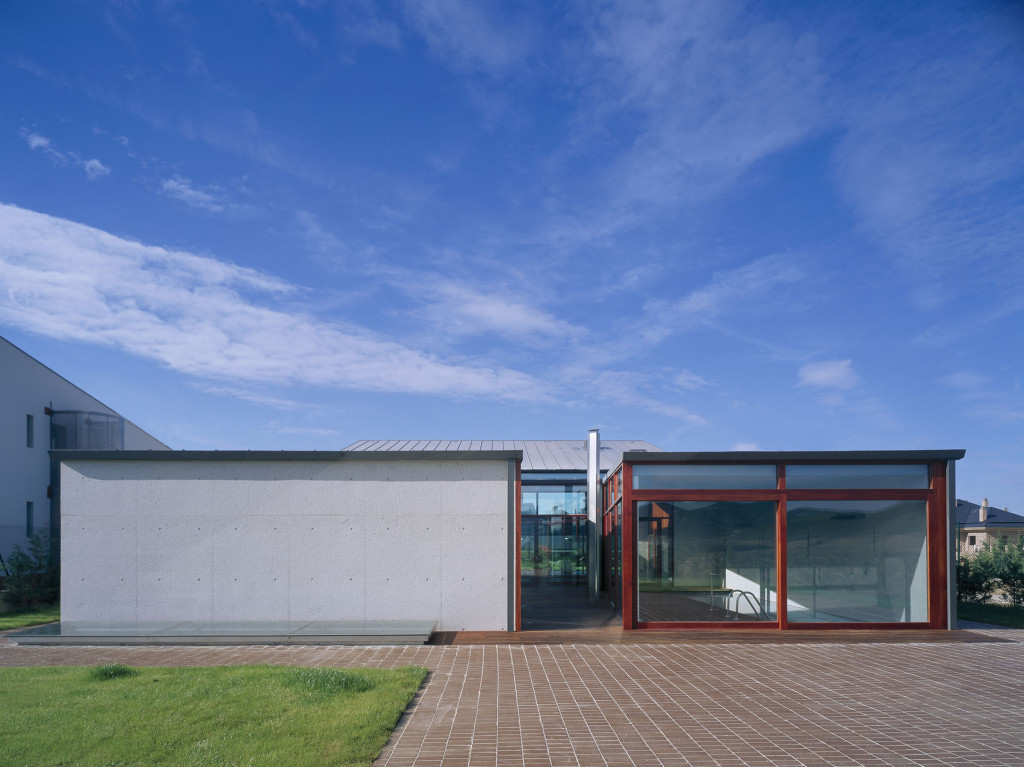 Given the scarce value of the built context (a residential area of single-family housing units mostly), the project tries to study a formal and volumetric proposal where the main question is the relationship between the interior (full of transparencies and continuous spaces) and the exterior that makes itself present through “incisions” and cracks, transparent in the interior, and that at the same time outline and “sculpt” the concise and clear volume of the exterior. 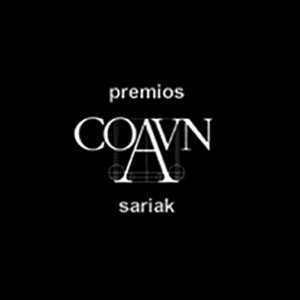 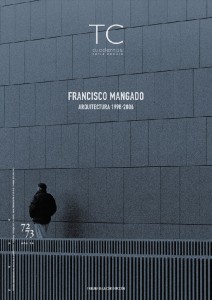 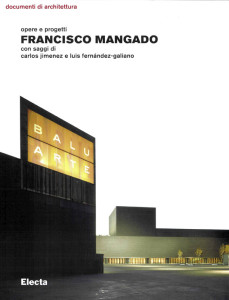 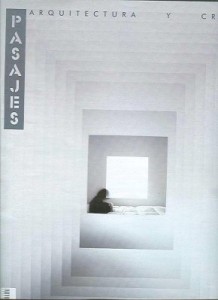 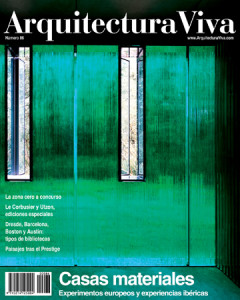 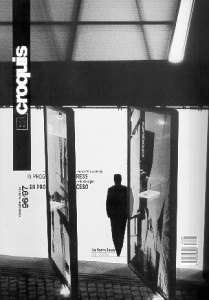 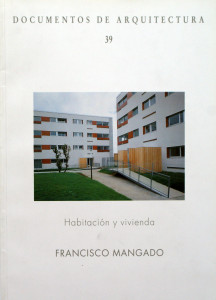 House in Irache
1993
/
1996
The proposal explores how quite a simple piece of architecture can relate to its distant physical context; in particular, how an abstract assessment of that distant context, characterized by beautiful profiles southward and northward and by the Monastery of Irache to the east, can serve to define a project whose real starting points – an immediate environment of ordinary constructions in an upscale residential area, and a relatively plain program – would not on their own have provided sufficient guidelines for action. Material and constructional aspects have been taken into account in a special way. 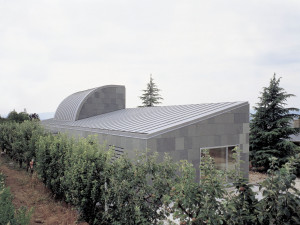 113 Social Dwellings in Mendillorri
1999
/
2002
The building is located in Mendillorri, a recently developed area very close to Pamplona. It is a low-density area devoted mainly to social housing and with a generous amount of green spaces. The site’s topography and the elongated shape of the plot, between a large park and a built area, are the essential features of the project and to a great extent the guidelines of the proposal.Hence, a first stretch of the building opens up to one of the most important and spacious public areas of Mendillorri (the “plaza”), in the intermediate stretch it shapes the street, and at the end it accommodates ground level dwellings with a garden. Different urban and typological conditions which are addressed specifically, but which start from one same architectural unit.The double orientation allows the building to be in contact with the park and the large square, as well as the street of access to Mendillorri. The entire building can be conceived of as a limit, a frontier, a shared boundary line between park and built area. The ground floors are very significant in this sense. When open to form large porches they act as “doorways” between one another, establishing a visual and physical continuity between the public spaces of the built area, square and street, and the park’s topography. The rear street, generated from an abrupt topographical cut and materialized with rough stone gabions, extends the paved surface of both square and street, allowing an easy access to the landscaped sides of the park and the arcades. There are two levels to reach the buildings: from the park via bridges that span the existing drop of the terrain and contribute to distinguish the “landscape” built on this side, or directly from the street at the lower level of the building. 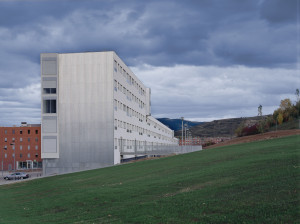 219 Social Dwellings in Vitoria
2006
/
2010
The proposal aims at rationalizing as much as possible the urban occupation as well as the resulting schemes. This project elevates the principle of efficiency to architectural category, a principle that is considered essential when it comes to dealing with subsidized and social housing projects, because it affects not only those decisions regarding layout or typology, but also the architectural projection and design.The corners and the partitions amid different architectural types such as the tower and the adjacent linear building, often have a very complex architectural solution that results, most of the time, in inefficient distributions. In our proposal, these areas become ‘special places’ that provide solutions in keeping with the aforementioned pursuit of efficiency, with wood-paved surfaces in the form of large terraces that articulate the different blocks that are placed at specific points, and which may be considered “built extensions of the interior landscaped space”.The proposal highlights two elements that are considered essential in the layout. On the one hand the interior landscaped space, conceived as an area dotted by tall trees; and on the other hand the tower, which goes up as a freestanding, autonomous element.   As far as typology is concerned, the aim is to establish a strict geometric order that sets the service areas apart from the living areas and kitchens. The organization of the rooms ensures an easy adaptation to the different needs of the families. All this allows a constructive and practical order that in the end reduces expenditure in home improvement. In the linear blocks the living areas and kitchens are oriented towards the large interior space, always towards the east and the west like the rooms. The terraces earn a special significance in the case of the tower. Generous two-meter wide terraces measuring that can be conceived as extensions of the interior living space, places where one can rest, eat or simply observe the landscape and enjoy the faraway views, taking advantage of the height of the tower. 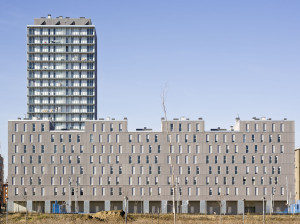 177 Social Dwellings in Valdebebas
2009
/
2015
The project tries to reconcile the privacy of the dwellings with attention to goings-on outside the block, so in the floor plan, the units are arranged in such a way that on the south side, towards the area that will accommodate offices and the ‘City of Justice’, a public zone will offer cafés, restaurants, stores, etc.; a recreational hub that will also be representative and vital in terms of exchange of functions, and therefore urban and with economic potential.North orientations are avoided. The predominant directions are east and west. The layout of the dwellings allows elements like shutters, etc., which allow full use of the energy advantages of direct sunlight in winter while curbing direct shine in summer.The garden interior of the development also receives plenty of sun, thanks to the way the buildings are arranged.Besides the organization of the public space, layout efficiency and economy of means have been pillars in the choice of types. Minimizing the number of vertical communication cores has been fundamental. So has concentrating the building services in a single core of installations, which makes the rest of the spaces more mobile and transformable for future reorganizations.

Dwellings in Zac Andromède Beauzelle
2011
/
2018
Whenever we design housing, a main concern is to simultaneously upgrade the public spaces that result from the urban scheme. The first decision here is to arrange the construction by creating a large inner garden at the center, and connecting the communal spaces to it, in succession. This interior space is in turn a direct response to the nearby park, Barricou, that accompanies the structural scheme of the metro line.The fragmented geometry of the apartment blocks, the grouping of units, and the organization of the different dwellings – whether organized collectively or coming individually or as duplexes – are all done with the intention of achieving diagonal views that connect these spaces to the garden areas around.Wood painted red and aluminum plates are the materials used in all the facades of the various blocks.Typological variety is another objective of the project, so corner arrangements are capitalized on. Corners provide opportunities to develop diverse types, as do the tops of buildings, where special home units can be built, with terraces taking over roofs while creating compositions and profiles that deviate from the monotonous. 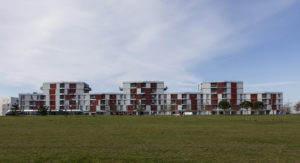 Dwellings in Monges Croix Sud-Blagnac
2011
The location here is one of low density, of isolated buildings organized along sidewalks and street alignments. The value of public space is in this case subordinated to the nature of the private spaces, and the proposal is configured on the basis of the organization of the volumes that give priority to the structure of the open public space, with attention to the following objectives:-  Shaping the public space, where the implantation of the various buildings is carried out through a constant search for different diagonal perspectives, with emphasis on an interstitial outdoor garden space that is rich with complex and attractive visuals, as well as visual links between the future domestic spaces.-  Organizing the apartment blocks with an eye to typological diversity, and opening up the main domestic spaces to the south through exterior filter spaces of the terrace kind.- Designing the circulations in such a way that allows wheeled access to the dwelling, and priority to pedestrians as a fundamental given in the design of the garden areas around the dwellings.For the exterior urbanized areas of the ground level to function properly, a unitary and continuous system has been designed that qualifies the different exterior zones through a landscaping treatment. 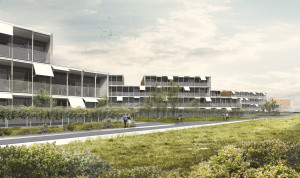